Those of you who read my blogs regularly will know I have been doing really well recently.  Long term use of worry beads is definitely making me generally more relaxed and less likely to get stressed.  Yesterday goes to show that however relaxed you are normally certain things can only have only reaction.  We are going to attend the Hollowell Steam Rally next month as a great way to get worry beads into people’s hands.  The event attracts 40,000 visitors each year and I am sure a large proportion of those will have some sort of stress in their lives.  Whilst it is good to show the worry beads it is even better if people can buy and take them away.  To this end we want to be able to take card payments in a field.  Technology does exist and we had planned ahead and asked for the device from a High Street bank.  I should now point out that after 24 years working for the bank concerned I am now retired but at the time of retirement I had an excellent understanding of what the bank wanted to offer its customers, great products/services delivered in a clear and simple way.  Boy have things changed!!

Our request for the equipment resulted in, yes you’ve guessed it, nothing!  After weeks of waiting, having spent nearly an hour going through a ridiculous process of applying for one, something had gone wrong.  I do not normally deal with the banking as we have had other experiences of poor service and huge waits on the telephone so my wife deals with them.  On this particular occasion she had lots of other priorities so being completely naïve I said I would call.

I started with a telephone number we had been given as the Business Banker who had messed up our application had moved on but not been replaced.  This got me through to a call centre automated system.  First problem was what I wanted to do was make a complaint and get the device sent out.  None of the automated options covered complaints and the card machine, so I picked one that I hoped would lead to a human being.  Those of you who are familiar with modern telephone banking will know that they try everything possible not to speak to you and will give automated answers to questions you may have.  I eventually got through to a human who informed me that he could take my complaint but he could not resolve it, so he was not going to take my complaint.  How do these people ever improve, or do they not want to anymore?  We used to use the ethos that each complaint was someone who was giving us a second change and an opportunity to get it right then and correct any issues we have for the future.  He told me I had to go to the credit card arm of the bank to get the device and transferred me to, yes you’ve guessed it, an automated telephone service.  There were five options none of which were probably what I wanted.  I cannot be certain as two of the options could have been in a foreign language as far as I knew.  I picked an option and got another automated option with them sounding anything like what I wanted.  I eventually got a human who told me I had come through to another company, not the bank.  They gave me the phone number for bank as I did not have it.  This was correct as I got the same automated message I had got before.  I picked another option, but that lead me to more automated options which would lead to automated solutions, no humans.  This was starting to bother me!!!

I hung up and rang again, trying a different option that was nothing to do with what I required.  Yes, I got a human, who explained I had the wrong department.  he would transfer me to the Sales Department.  Rather strangely this was not an option I had been given before, I always thought banks wanted to sell customers things, but not Barclaycard, I assume.  I got a very helpful lady who explained I had to go through a huge long process to be set up as a merchant.  I didn’t want to be a merchant, I just wanted a device to run with my business account which was what was sold to me by my Business banker.  No, I become a merchant and have the device or they could not help.  I had already spent 30 minutes trying to find the person who could help so out of desperation I agreed.  Credit searches and all sort of questions about my personal finances were asked.  What they had to do with it I don’t know as The English Worry Bead Co is a limited company.  I felt it would only slow down an already long winded process so I was “a good boy” and answered the questions and agreed to whatever I was asked.  Another 30 minutes later and I had finished.  Five working days later I would receive the machine with a pile of paperwork that had to be read in detail as non compliance could result in penalties being charged.  I hung up the phone and collapsed in exhaustion.  I had started this hour long challenge wanting to ask what had happened to my machine as I had already applied and gone through the process once but that seemed to have been irrelevant.

My heart was racing and I could feel my hands tingling, a tell tale sign I was in trouble, and anxiety attack was on its way.  My wife came into the room and said she had overheard my frustrated comments and stayed away while I finished.  She then stated the obvious, I was off upstairs to get my worry beads.  It was mid afternoon when I should have been working but I just could not face anything.  Ten minutes later, having got my 1Pear steel, I had been seeing how slowly I could get each stone to fall down the chain.  I felt great, I was calm and even raised a smile at how ridiculous it all was.

This story has another happing ending.  As my wife and I laughed about what has happened to the company we both worked for she said she remembered that PayPal were advertising a card machine.  The following morning, and a couple of minutes looking through their web site and a similar device was found.  It cost £49 whereas the bank’s machine was free but we had to find out how easy it would be to use the “new boys” to financial services.  Ten minutes, if that, later the device was ordered.  No monthly fees roughly the same commission rate and they had our business.  I am sure we all have similar tales of call centres, and this one was in the UK.  Why not get yourself some worry beads just for these occasions.  I challenge anyone to spend an hour on the telephone to a service provider and stay calm. 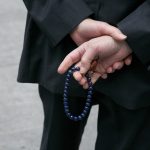 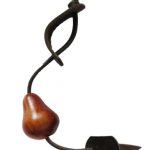 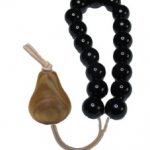